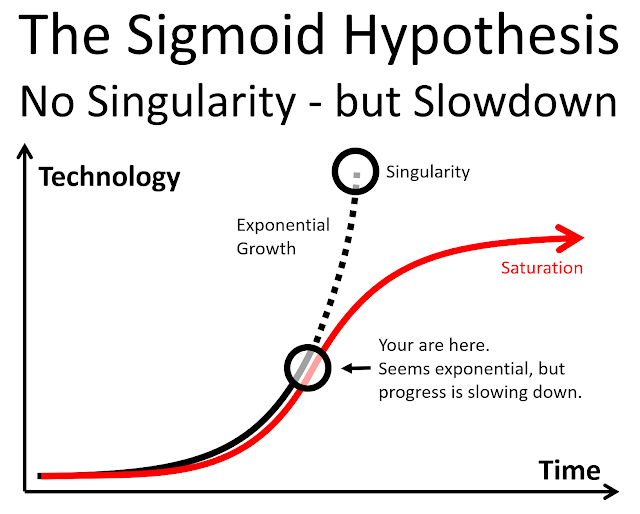 1920: The first Atlantic crossing by plane, a biplane with propellers. Commercial radio just started broadcasting. Nuclear Power is not even thought of.

1970: Nuclear power stations are common. Broadcast color TV is the norm. The Jumbo jet takes commercial air travel to a new level and humans have just landed on the moon.

2020: Still nuclear fission. Color TVs are now flat. The Jumbo Jet is still the largest commercial airplane and humanity is not able to land on the moon but is determined to regain the capability in a few years. There are smart phones and ubiquitous information, though.

That does not look exponential. The jump from 1970 to 2020 should have been even more impressive than the 50 years before. While information technology developed exponentially, almost all else just improved. Admittedly the reference dates are carefully chosen. Technological developments that started in two major wars have fully played out by 1970. But still, a person from 1820 would have found 1870 interesting. A person from 1870 would have been amazed by the state of the art in 1920 (radioactivity and airplanes). A time traveler from 1920 peeking into 1970 would not have believed her eyes (nuclear power, moon landings, ubiquitous electricity and lights). That is exponential. Not just change, but an increasing level of change. Accelerating progress.

Compare that to someone watching 2020 with 1970 eyes. The media and information landscape changed beyond imagination, but other than that the world has not changed a lot. It is bigger. There are other topics in politics, billions of people were lifted from absolute poverty. Things have improved: rockets are now reusable, electrical light is basically free thanks to LEDs, cars need only half as much gas, and the tallest building is twice as high. Still, everyday life looks like an improved 1970 with smartphones.

Humanity should be on Mars and beyond. After 50 years between transatlantic flight and the moon, the next 50 years should have given us more than just a flight to Mars. That would be linear. Exponential growth would mean something like a million people on Mars and the first woman setting boot on Saturn's moon Titan. And while Moore's law still holds, continuing the exponential growth of transistor counts, there are physical limits on the horizon and improvements come at increased costs in terms of prices and energy consumption. AI made progress but turned out to be more difficult than thought in 1970. And fusion power is still 50 years away.

There are lots of improvements going on. The tech level is growing. But the rate of growth does not feel exponential. On the other hand, the capabilities of information technology still grow exponentially. The amount of information available to researchers grows exponentially. Counting patents, the number of inventions per year increases which means at least faster than linearly. And while the population growth seems to deviate from the exponential curve, the number of scientists and engineers entering the work force is still somewhat exponential.

The resources put into technology still seem to grow exponentially, but the outcome appears linear. There is a worrying discrepancy between engineering resources, scientists, information, and processing capabilities on one hand and the resulting technological progress on the other hand. It looks like improvements are more difficult to achieve now than before. Every year we are putting in more effort in terms of money, thoughts, and knowledge. We might even get more improvements each year. But the aggregate of all technological improvements, something that we might call a technological level seems to crawl upwards slowly. It does not appear to accelerate. It seems rather steady, more like linear progress. Still improving broadly but not exponentially.

The question: is progress really getting more difficult? Does the difficulty increase exponentially eating up exponential investment to result in linear progress? Are we at a turning point where progress might even slow down despite increased efforts?

Maybe technological progress has never been exponential. Maybe it is sigmoidal. A sigmoid starts slowly then accelerates appearing exponentially. But it has a turnaround point. A point where the gradient maxes out and starts to fall. In other words, there is a fast period after which progress slows down. Later it might even saturate. That does not mean that technology falls back. On the contrary: the tech level increases. Products still get better. But more slowly. Because at a high level it is more difficult to make improvements. There are still improvements. Only they cost more. They need more investments, more research, more computer simulations, more data, more money, more time.

That's where we are now. The exponential technological progress we were used to has slowed to linear progress. It looks like the turnaround point. The point where things still get better, but technical revolutions become increasingly rare. Maybe the year 2070 will look like a slightly improved 2020. Self-driving cars will be common and fusion power will be only 20 years away. There will be permanent stations on the moon. Several billion more people will have joined the well-off global middle class. And movie recommendations will be as much spot on as music recommendations today. That would not be so bad. There will be no singularity, though. No runaway AI, no nanites dismantling the Earth. That would be good after all.