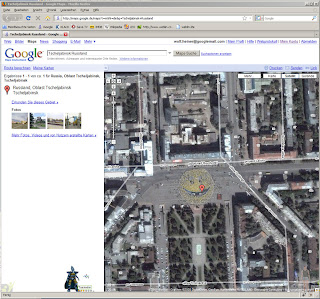 Citizens of the russian town Chelyabinsk calculated when the satellite QuickBird would cross above their city. QuickBird takes images for Google Earth and Google Maps. They created a giant smiley face. A rock concert on the main square attracted many people and everyone got a yellow cape.

And it worked. The image is on Google Maps. It looks like someone at Google was quicker than usual to put up the new data. Maybe Google likes the idea, that an entire town works hard to get its 15 minutes of fame on Google Maps.

To the right is a screenshot of the Chelyabinsk city center. There are also images taken at the event.

( The figure in the lower left corner is my Weblin )

Update: It looks like they restored the original image. Maybe they do not want to encourage copy cats. After all they are trying to show a realistic view of earth and not a collage of events.

Lol, not a photoshop idiots.

So why does it show an empty carpark now then ?

Of course it's photoshopped. If you go to Google Maps and find the real square, you'll see cars in the exact same spots as in this shopped version, but no smiley face. So either Google Maps or this image is shopped, and I'll bet it's not Google Maps. Go and look for it, it takes all of three minutes to check.

Of course it's photoshopped. If you go to Google Maps and find the real square, you'll see cars in the exact same spots as in this shopped version, but no smiley face. So either Google Maps or this image is shopped, and I'll bet it's not Google Maps. Go and look for it, it takes all of three minutes to check.

Not sure why it does not show it on Google maps, though O.o

Er, it's fake! What's the point of this article? It's not actually on google at all if you check - you just created it in Photoshop. Pathetic loser.

Why would this be fake? We've seen it before, many times (last time the "Marry Me gathering") and its not like Quickbird works in Realtime. It'll surely show up in Gmaps/Gearth soon enough.

It's not photoshop, I think it's the gimp.
Typical russian honestity...

there is a suspiciously short shadow from the monument south to smilye (shadows from building seem to be ok, compared to the ones from google maps)

It's not actually there if you look at that URL:

So are the linked images fake too? http://englishrussia.com/?p=2047

Same image from Google maps, same cars, same shadows, same everything. Except for the smiley. It is a fake, but why did you do it?

I don't think it could be on Google maps already. It should take some time before the images from the satellite are received and processed, and before Google Maps servers have updated that data. So the image as it seems to appear on Google maps is certainly 'shopped (as that's not the image that is live on Google Maps now), but that doesn't mean the whole thing is fake. I think it's a nice idea.

Wow how many trolls does it take to change a lightbulb? None because they assume the bulb is fake...

Did anyone actually follow the link to the photo's of the event? Ah yeah I suppose they faked that using 3d crowd software and Discreet flame for compositing. Get a life trolls.

Yeah, the cars definitely give it away, one of the images must be fake.

Just one question remains: Who faked it? I mean it could also have been modified by the guys at google to get rid of the smiley... The other possibility is more plausible though ;)

You're all stupid fucking fucks!
Why do you think if it's from Russia, then it's a fake. You're all fucking photoshop fakes yourself!
The photo is real! I'm a citizen of Chelyabinsk, the city where this event took place. Every citizen was invited to take part there, but they took only a couple of thousands. The photo has been taken from space. That day it raining heavily, and in order to realize the show, the city authorities decided to disperse clouds over the square with special air forces which was truly done.

Is it possible that the event is real: link to pictures of everyone in ponchos and yellow hats, etc... but the picture is photoshopped? I think that is the most likely conclusion. Perhaps the excitement of the event led to a little photoshopping (I did compare and the cars are in the same exact spots). I just don't see how the live event pictures could be faked. Only time will tell I guess.