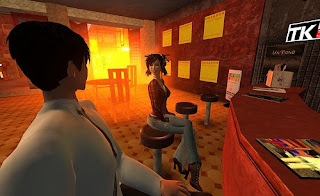 Max 88 k concurrent users (including bots) means about 70 k day's average. Can 70 k users really make 50 k voice conversations at any given moment, especially if "more than 50%" but not 100% use VoIP at all?

Either the voice number is a factor 10 too high or all logged in residents have the VoIP application running. This would mean the client starts it automatically and all running VoIP apps are counted no matter if the user is talking or not. But I would be surprised if everyone is really talking into a mike all the time.

70 k average users log 2.2*10^12 seconds per year. 15 billion minutes in 18 months (lately 1 billion per month) translate into 7.2*10^11 seconds VoIP per year. Meaning: all logged in residents talk 33 % of their inworld time. Considered, that only 50% are using VoIP I conclude, that the VoIP users in SL talk 2/3 of the time even during walking, flying, teleporting, profile clicking - almost always. This is a bit much. I wonder if so many people even have a headset and wear it. And indeed: the original press release only claims "Residents are now consuming over 1 Billion minutes per month". Consuming is the keyword. They are counting squawking speakers, not talking heads. The press release continues with the bold statement "making Second Life one of the largest VoIP providers in the world". Its rather one of the largest receivers. But the press liked it. Good story.

They make many VoIP minutes, but there is probably very much noise in the air.

Disclaimer: I am only talking about the numbers. The feature is great. Long live ubiquitous ambient 3-D proximity voice.

Update: the Q1 economy report makes it even sharper. It claims: "Second Life Residents log 124 Million hours". This translates into 58.000 average users, which means that my estimate of 70.000 was a bit high.Thus, VoIP users in SL talk 80% of their inworld time instead of 66%.