Are we witnessing the birth of infosocialism?

The core of infosocialism is the observation, that information is very different from material goods in that it can be given away without the former holder losing anything. The notion of "intellectual property", however, often leads to injustice, more than omitting it altogether. Therefore, infosocialism claims, that "information wants to be free".

David Pulver introduces infosocialism in 2034. But it looks like we are witnessing the birth of a similar movement in the real world now. In 2006 the "Pirate Party" was founded in Sweden. It strives to reform laws regarding copyright and patents. The party got 7% of the total Swedish votes in the 2009 European Parliament elections. Pirate parties have been founded in several other countries.

The agenda also includes the strengthening of privacy rights and the freedom of information. These ideas are key factors in the movement against internet censorship in Germany, where the government passed a law to establish a censorship infrastructure with the combined votes of the grand-coalition between the German social democrats and conservative party. The law is made to for a very good cause. However, german activists and opposition parties claim, that the methods planned by the government are as well insufficient for the cause as they are threatening to privacy and the freedom of information.

The german pirate party got 0.9% in the European elections. If the topic remains active for three more months, then there is a good chance, that the german pirate party gains several percent in the general elections. Many voters of the traditional left-wing anti-establishment party, the greens, do not feel represented, since many green representatives abstained from voting on the internet censorship architecture law. Pirate parties are supported primarily by a technophile, young, well educated, middle class electorate. A good match.

40 years ago, the green movement emerged with an environmental agenda. It was then strengthened by the opposition against nuclear power during the 1970s. Later it went mainstream with a much broader environmental, left-wing, yet middle-class program. We might be seeing similar development, where "pirate parties" start with an anti intellectual property agenda, then activate people with privacy issues. Later the movement might turn into a more general infosocialism which includes copyright/patent issues, privacy, and transparency. In a modern society, where information is the most valuable factor, these issues may influence our life more than we currently think.

There are VCs, business angels, and investors who think, that the quick and big money is in ads for virtual worlds.

There are also other voices who expect microtransactions to grow sharply over the next years.

This report at least predicts:

"86% of revenue in 2015 will come from microtransactions -- this equates to a growth from 2008's microtransaction figure of roughly $1 billion, to $17.3 billion in six years time."

It will be interesting to watch how things turn out. Maybe ads can swing up to the same performance.

What Are The Rewards Of Free-To-Play MMOs? 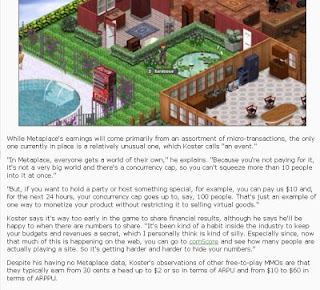 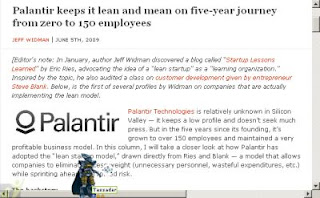 "Palantir runs a tight ship, providing vital information on an internal wiki, keeping meetings concise and striving to hire candidates with “an engineering mindset, even in our administrative people,” McGrew says.

The division of the company devoted to government products has only one ten-minute meeting every week to make sure developers and managers are on the same page and to discuss prospective customers. There is also a company policy against using PowerPoint decks.

The company is also unique in that it doesn’t have any soft-skills marketing or sales personnel. All customer-facing employees have degrees in computer science or symbolic systems and are capable of walking customers through software installations and debugging. This has helped Palantir build tighter relationships with its clients."

We are in a technology business. Technology is king. Engineering knows what to do. Of course many other people also know and we need their input. But if engineering fails to know, then the company is doomed anyway. No technology agnostic, smart ass business developer, investor relations, sales driven product management can save it then. It's the technology, stupid. Get over it.

This is technology and you listen to us!

You don't believe me, because I am just a techie? Maybe you believe IMVU or Toyota: http://startuplessonslearned.blogspot.com/2008/11/sciencedaily-corporate-culture-is-most.html